I’m on a quest to sort out all of my ancestors named Abraham Simonson (there are ten). Once I figure out Abraham, I’ll work on the Isaacs (11) Elizabeths (15) and Johns (22). It would help if they were in different lines of work, but no. Mariners all, it seems – or mostly.

Our current person of interest is Commodore Abraham Simonson, king of shad fishing. The goal is to figure out who his parents were, or his wife, or his children, so I can see where he fits.

The old Commodore was in the newspapers all the time for his legendary shad fishing expertise, but none of the articles are helpful in pinning him down. Here’s a few more:

“The first shad of the season was caught by Messrs Simonson & Co in their nets at Robins Reef on the 27th of March” – Richmond County Gazette, April 1st 1868

You know he was something of a celebrity, because he was even the subject of some snark:

“We came …to Springfield [Connecticut] where we supped and found a cleanly and sumptuous entertainment for the night. Here we feasted on Connecticut River shad just out of the pot, of super excellent flavor and fatness far superior to the first trophies of the season caught by Commodore Simonson yearly in New York bay and served up on an Astor House platter.  – F.W.S., The Knickerbocker; Or, New-York Monthly Magazine, Volume 45

Sounds like someone was jealous she didn’t get invited to Astor House.

Finally, there was this:

“Commodore Abram SIMONSON, an old and respected inhabitant of Richmond county, died at his home in Van Duzer street, Stapleton, on Monday evening, in the seventy-eighth year of his age. He had been for nearly sixty years engaged in the Staten Island shad fisheries and was the head of the well known firm of SIMONSON & Co., fishermen”. – Rochester Democrat & Chronicle, January 5 1877

That’s Rochester, as in New York, so either he was a shad fish god or it was an extremely slow news day.

After he passed on, his firm kept going, though apparently not quite so successfully:

Our phone lines are open and we are desperate to know:

And while we’re at it: what is a gilt-net? And are shad really better in Connecticut?

This is Part Two of my paraphrased transcription of the Town Book for Castletown For the Entry of Black Children. For the whole scoop on this historical document and a link to the online version of the original, see my Part One posting with transcription of slave births. In this post, I’m describing the records of adults that are found in it (even though it’s called the Children’s Book). 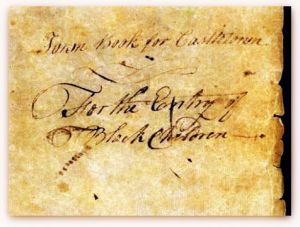 Certificates of Freedom and Eligibility to Vote

The following entries all occurred on 24 Apr 1811.  These aren’t manumissions but legal certifications that free blacks were indeed free. It seems they were filed in response to a New York State law passed on 9 Apr 1811, an “Act to prevent frauds and perjuries at elections, and to prevent slaves from voting.” This law was a voter suppression effort passed in reaction to the 1799 Act for the Gradual Abolition of Slavery. The law stated:

“it shall and may be lawful for every black or mulatto person within this state, to make and exhibit proof…of his freedom, such proof to be reduced to writing [in court]… [The judge or recorder] shall certify the same in writing, stating therein a brief description of the person so adjudged to be free, his age, the place of his birth, and the time when he became free, as nearly as the same can be ascertained, and it shall be the duty of the said black or mulatto person to cause the said proof to be filed, and the certificate … to be entered of record … and a copy of the said record… shall be the certificate of freedom required by the preceding section, to be produced at all such elections, and unless such certificate shall be produced, no black or mulatto person shall be permitted to vote at any such election…”

The following certificates were all dated 24 Apr 1811:

On the very last page of the book, there is a long paragraph of very faint writing (probably pencil) that is undated and unsigned.  It records the location of polling places in an upcoming election for a “Person to Represent the County of Richmond in Assembly,” probably the same election for which the certificates above were filed.

1. Ancestry.com’s agreement with the New York State Archives requires that New York residents get free access to 16 record collections. These include the New York State censuses for 1892, 1915, and 1925; the 1940 Federal Census; Military Records for Civil War, World Wars 1 and 2; and more. To get a special free access account, go to this specific page , or this one, enter a New York State zip code, and then pick a User ID and password. That’s all there is to it! Be careful not to click on any offers for Free Trials or Subscription discounts – you don’t need either of those to access this collection and your free account does not expire.

10. I broke through one of my brick walls using a database at the Hudson County (NJ) Genealogical Society, which covers Bayonne and Jersey City. They have a great collection of databases covering births, deaths, military service, newspapers, and more. Some require a membership to access, but
many are free.

A sad chapter in Staten Island history is the story of the Willowbrook School. Health care facilities were been unusually prevalent on Staten Island, and generally known for excellence – except one, which was shut down by the state in 1987 due to poor conditions and abuse of the residents.

The Willowbrook students were whisked away to a facility in upstate New York, and nearly 50 of them are still living. Now the Willowbrook story is documented in an exhibition at the nearby Paul Smith College.

Once it is finished traveling, the exhibit is expected to be housed permanently at the remaining Willowbrook structures left, which are now part of the College of Staten Island.

I was totally blown away to discover this historical document online! In years of researching Staten Island records I have not come across a copy of this: a digital image of the Town Book for Castletown For the Entry of Black Children. It’s online in the collection of the New York Historical Society Museum and Library.

You probably know how rare it is have birth records for slaves.  Here is the story: in 1799, the New York Legislature passed “An Act for the Gradual Abolition of Slavery” which phased out slavery over time. All children born to slave women after July 4, 1799 would become free at a certain age: males at age 28 and females at age 25. To comply with this law, owners were required to legally record all slave births in order to document their eligibility to become free.  So this is that record for the town of Castleton on Staten Island. (There is also mention of the Town of Northfield in some of the records).

Many of the birth entries appear to be handwritten by the mother’s owner, who would have also owned the child. The wording and the details given in an entry vary depending on the writer. Most of the entries mention the child’s mother’s name, and some also give the father’s name and his owner’s name. The births are not recorded strictly in order of occurrence, as some reporting was delayed.  Here’s an example entry:

I do hereby certify that a male negro child named Nicholas the Father of whom named Sam belongs to me, and the mother named Bett belongs to Cornelius Cruser, was born In my House at Castletown the eight day of may in the year of our Lord one thousand Eight hundred, and I request that this return of the Birth of the said child may be Entered agreeable to the directions Contained In a late act for the gradual Abolition of Slavery. Castletown January 15th., 1801, John Mercereau

And the book also contains records of manumissions during this time period!

Unfortunately, the document is not searchable or printable. Because it’s so priceless, I decided to transcribe it here. There’s a lot of information, so this post will be Part 1 of a 2-part series. Below are birth records; I will do the manumission records in a second post.